Microsoft has been a market leader in the IT industry for quite some time now, and recently, they’ve shown why this is the case: they never rest on their laurels. Every now and again, competitors may pop up and jump ahead of a Microsoft product in terms of user adoption, but the tech giant only takes this as a challenge to improve its offering. Yay, competition!

This is the case with Microsoft Teams. Its rival, Zoom, dramatically captured a huge chunk of the video conferencing market as organizations all over the world turned to remote working to sustain operations. This spurred Microsoft to upgrade Teams and fight for a greater share of video telephony customers.

Below are some of Teams’ latest features:

According to Statista, nearly 45% of the world’s population has a smartphone. This makes improving the experience of mobile users an excellent strategy for gaining market share.

For instance, Teams is primarily a group chat app, but now it also enables users to switch to video conferencing with a touch of a button. Additionally, the new “Safe” feature allows individuals and groups to store and encrypt sensitive and valuable information (such as home Wi-Fi passwords) on their mobile devices.

Most of the other updates are specific to particular operating systems for mobile devices.

“Zoom spurred Microsoft to upgrade Teams and fight for a greater share of video telephony customers.” 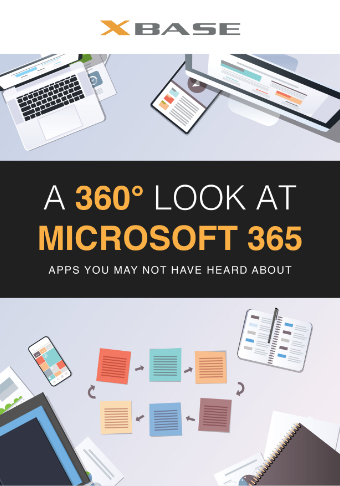 Microsoft Teams is but one of many apps offered in Microsoft 365, the tech giant’s cloud-based productivity suite. To learn more about Microsoft 365, download our eBook.

Beyond mobile-exclusive features are new updates that are available to computer users.

Competition pushes even tech titans like Microsoft to improve their products and services. What is true for software companies is also true for managed IT services providers, which is why XBASE always offers Exponentially Better™ IT services. Discover how we can help you use tech to power up your business by scheduling a FREE consultation with our IT experts today.